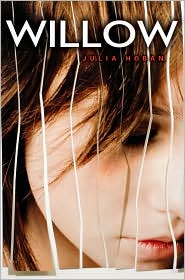 "It's hard to keep a secret when it's written all over your body..."

Buy it now at: Barnes and Noble Amazon

It was seven months ago that Willow lost both her parents to a horrible car accident. She couldn't feel more guilty about that day, since she was the one behind the wheel. Her parents had to much to drink, and she only had a drivers permit. Now she lives with her much older brother and his family.

The only way she can deal with the memory of her parents dying, and the guilt of being the one behind the wheel, she cuts herself. Willow confides this monumental secret in a classmate named Guy. He won't give up on her, and sticks by her side to support her.

Cutting is a seriously emotional problem for some people. The people that aren't cutters, cannot understand what is so appealing about mutilating one's body. Julia Hoban really opens you up to the cutting world, and gives you an idea of what might be going on in a cutter's mind. Hoban does not glorify cutting or make it sound appealing, but simply shares what it feels like to have pain inside of you that can only be released with a blade.