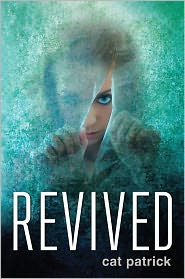 Daisy is part of a top secret government run program that brings people from the dead, with a drug called, Revive. Daisy herself has had Revive used on her 5 times, and after each time she must relocate with her government issued parents, Mason and Cassie.

They are now relocating to Omaha Nebraska. At her new school, Audrey is the first person she meets, and they instantly hit it off like best friends. Audrey has a super hot brother that Daisy immediately sets her eyes on.

"I've got a best friend and a boyfriend, and it's fine by me that they've got the same last name" Chapter 23 page 191


Daisy finds out that her best friend has hidden a secret that could change how they plan the future. Can Daisy find a way to get Revive to someone who needs to live? Will it be worth the cost?

Not everyone you believe to be trustworthy, actually is.

This book has a great premise, a drug that can bring you back from the dead. With a drug that is so powerful, it could change society forever. If anyone found out about such a drug, there would be chaos in the streets. Of course, such a program has a villan that wants to expand his research and take it much further then it ever should get.

Does it count as murder if you bring them back from death?