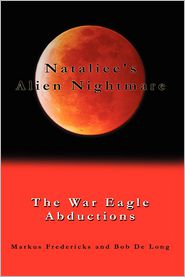 Buy it now from:
Kindle
Amazon Paperback
Barnes and Noble


Add it to your Good Reads Shelf

Stories from Markus S Fredricks claim he has seen a UFO, in 1967 in Washington. A chat room about UFO believers got him in contact with a man named Bob De long. Bob believes he was abducted by aliens while he was spending time in Cuba.

A sheriff and a deputy are driving around town when the spot a young girl walking barefoot and what looks like an expensive dress. Instantly they think of the missing girl Nataliee who has been missing for over three months. She was last seen at her high school prom, and even though they first thought her date might have something to do with it since he claims she was abducted by aliens. He claims aliens levitated Nataliee ina beam of blue light and took off with her in their space ship.

When Nataliee is recovered she confirms that she was indeed abducted after escaping with others who were being held captive. I found Nataliee to be a very interesting character with her sixth sense/ESP that she has somehow gained after being abducted.

I really enjoyed all the little humorous parts throughout the book which kept the book from being too serious. I found out that this book is considered fact-based-fiction," which I finds perfectly matches this book's category. I also enjoyed the topic of the books since I've always been interested in Alien abductions and what could possibly be out there in space, that Earth doesn't know about. Mr. Fredricks is a very creative writer, and I hope he has plans for more books in the future. I give this book a 5/5!