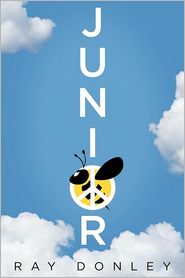 Buy it now at: Barnes and Noble | Amazon

Add it to Good Reads

Review:  This is the personal journal of Joshua Jennings Jr. (Junior) who is on the run after being suspected of murdering his father, the vice president, and president of the United States. His father was actually killed by a bomb that he had set in motion, with the intention of Junior taking the blame for his death. Now Junior is labeled as a terrorist and is the most wanted man in the united states.

He's been on the run from the law, and others who want to kill him, for three years, and he kept a journal throughout the whole time to show what he went through to find the truth of what really went on with his father's bomb. Eventually Jennings leaves his journal and disappears completely. As soon as someone found the journal, it became a number one bestseller.

This book is so well written, I found myself forgetting that it wasn't true. There are scholars and famous people that Jennings refers to in the footnotes of his journal, which almost makes him sound like a prodigy or someone who could possibly predict the future. Since the book takes place in the future, it makes it even easier to believe the story could actually happen.

I have heard some people refer to the footnotes as being unnecessary and abundant, but I thought it proved even more that Jennings could possibly tell the future since it contains information that seems impossible for Jennings to have known.

He kind of reminds me of Jules Verne's books, in the sense that they both wrote about things that in the future, the events come true, or nearly true. All in all I absolutely loved the book. It had comedy, drama, thrill, and excitement that kept me intrigued throughout the book. I give this book 5/5.