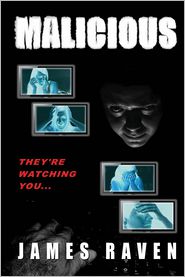 Malicious is very thought provoking because the plot is so plausible considering how technology is in today's time. The characters felt realistic and true in a very human way, and not like any superhero, or super cop in this case.

This is a great book with no spelling or grammar issues that I found. The cover is so mysterious, you can't help but pick it up and want to learn more about what's inside. I rate this book 5/5.