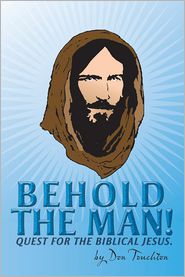 Quest for the Biblical Jesus

When you think of Jesus, you think of him after his human years, after he was resurrected by God. This book goes beyond that, talking about his human years. Don Touchton does a great job at applying different factors to describing Jesus during his human years. Such as, the time period, genetics and his personality type. Everything is based off of real scripture from the bible. Nothing is fabricated or gone off of any other documentation.

I think the main focus of the book is to show that Jesus was a simple man like you or I am today, and he achieved wonders, and so can you in today's time. Following his footsteps, and pleasing God are simple tasks that anyone an abide by.
It's an eye opening read, to fully understand the gospels and scriptures about Jesus in both human times, and after. If you truly want to know Jesus for the man he was on this earth, this is a great book to start out with. It does take a basic knowledge of the Bible to follow along. This book could be considered controversial since no one knows for sure about some of the concepts about Jesus during his life. I understand a lot more due to this book, and appreciate how much I have learned. A big thank you to Don Touchton who deserves nothing less than 5/5.

WRITTEN BY Unknown at Monday, December 09, 2013 No comments:

Email ThisBlogThis!Share to TwitterShare to FacebookShare to Pinterest
Links to this post
Labels: Behold the Man, Don Touchton, religion

Mac Thorne’s time as a Changeling is coming to an end.

It may have taken eighteen years, but Mac did finally manage to do what the Council wanted: she chose a teacher and renounced the in-between.

There’s just one last step. She must say goodbye to her human. Forever.

After being challenged in every way possible, Mac leaves what she thought would be the easiest task for the last possible moment. As midnight on July fourth draws near, though, she hasn’t found a way to give up Winn Thomas.

Nor does she want to.

With time running out, Mac stands at a literal crossroads. Choose Winn, and she’ll be stripped of the only family she’s ever known — vampires, dragons, and her favorite demon. Even her own mother. Accept her position on the Council and rule as an equal to her twelve peers, and she’ll forget Winn ever existed.

Independence and freedom have never before been so limiting.

In this final chapter of the 19th Year Trilogy, it’s time for Mac to decide.

DARKEST DAY is the third installment in the 19th Year Trilogy, featuring Changeling Mac Thorne and her hot-geeky boyfriend Winn Thomas. And J. Taylor Publishing is giving away FIVE ARC copies.
To YOU!
You don’t even have to be a book blogger!
Nope, so long as you are willing to leave an honest review between the dates December 23rd 2013 – January 6th 2014, you are eligible to enter.
Interested?
Then just fill out the form and keep your fingers crossed.

Emi Gayle just wants to be young again. She lives vicariously through her youthful characters, while simultaneously acting as chief-Mom to her teenaged son and searching for a way to keep her two daughters from ever reaching the dreaded teen years.

Ironically, those years were some of Emi's favorite times. She met the man of her dreams at 14, was engaged to him at 19, married him at 20 and she's still in love with him to this day. She'll never forget what it was like to fall in love at such a young age — emotions she wants everyone to feel.

WRITTEN BY Unknown at Monday, December 09, 2013 No comments: