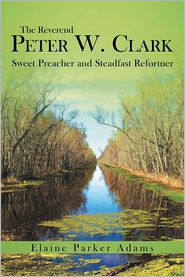 The book starts at the turn of the twentieth century, but takes place during the twenty-first century as the author looks back during the preface. This is where the characters are introduced and defined, which includes a lot of detail.

In the beginning you are introduced to many different characters all at once, which was a bit overwhelming. I felt I should be taking more extensive notes, more than I usually do. Describing the family and the members within, what appears on the onset, to be an introduction of key members within the inner circle; albeit a large circle.

In the fist chapter of the book, they define what could be determined from official record the birth of early childhood of Peter Wellington Clark. Slavery was going on strong despite the larger numbers of the black population compared to the lower numbers of the white population.

The settling starts in Louisiana at the start of the civil war, around 1862, and takes the reverend through many tragic evelming. I felt I should be taking more extensive notes, more than I usually do. Describing the family and the members within, what appears on the onset, to be an introduction of key members within the inner circle; albeit a large circle.

Why Peter Clark decided on becoming a Methodist minister is a mystery, but the book desires in some detail his life's joinery during the late nineteenth century in the state of Louisiana. The book describes the sacrifices and the hardships the reverend faced as he practiced and spread the gospel of Methodism as well as providing the reader with an understanding what black ministers endured during the late ninetieth century to the early twentieth century.

The last thirty percent of the book is dedicated to a chronology of Reverend Peter Clark, a bio sketch of the author, bibliography and footnotes, etc. I believe the bio sketches and chronology would be better suite in the preface, which would make the preface much more detailed.

Overall, the book was very detailed in historical accounts and details and seemed to be very accurate. A pretty good read, that I would rate a 4/5.

WRITTEN BY Unknown at Sunday, November 17, 2013 No comments: