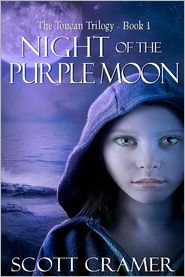 Buy it now at:
Night of the Purple Moon
Amazon
Kindle

Nobody predicted the lightning-fast epidemic that killed older teens and adults.

Review:
Just as everyone else on Earth, Abby is excited about seeing the comet. It's expected to turn the light from the moon purple and apparently the sunrise and sunset are to be phenomenal. Once space dust has settled, they learn it has killed majority of the adults in the world. Only those who were quarantined, including the scientists and children were not affected.

Abby and her brother are now put with the responsibility of making sure Toucan and all of Castine Island do not get sick, because those who are on the verge of adolescence become victims to the space dust. Time is running out for some, and their running out of options.

There were a lot of scenes in this book that reminded me of James Patterson's Maximum Ride series, with such strong and mature kids who take control of tough situations and make the most of what could be a very worse situation. I mean this comment to be a much earned compliment because as we all should know, James Patterson is a popular author that most should aspire to become.

I found this to be a quick and easy read, but yet still enjoyable. I hope to read more from Scott Cramer. I give this book 4/5.

WRITTEN BY Unknown at Sunday, February 10, 2013 No comments: